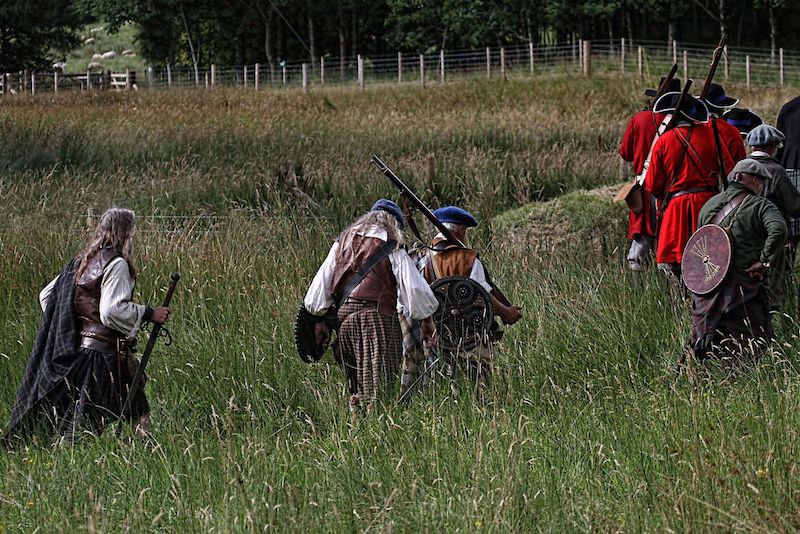 Infantry - Dale MacDonald Haigh coordinates all the infantry re-enactors, from the Living History Camp to the performances in the arenas that tell the story of the Battle of Killiecrankie. A piece on some of the units you will meet at Soldiers of Killiecrankie:- 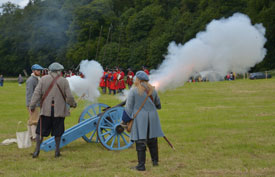 Earl of Loudoun’s Regiment of Foote. At Killiecrankie they are portraying for the most part Jacobite Highland Levies and cannon crew. Their members are mainly based from around Scotland, participating in the accurate re-enactment of 17th century life and warfare. All arms of military life are employed in the society; regiments of infantry armed with pike and musket, squadrons of horse (cavalry) and batteries of ordnance (cannon). Flickr Gallery. Facebook. Twitter.

Photographs on the web site - we are indebted to Rab Taylor of the Earl of Loudoun’s Regiment of Foote for the use of many of his images. 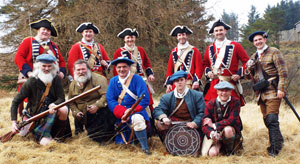 The Alan Breck’s Regiment was established in 2007 at the Palace of Holyroodhouse, to create a new living history society which could support initiatives at Prestonpans Battlefield in East Lothian. The group’s name recalls how Alan Breck Stewart (of Kidnapped fame) who fought as a Redcoat at Prestonpans before being restored to his true Jacobite loyalties after the battle. The name symbolises how the Brecks today are expected to participate as soldiers from either side of the conflict without prejudice. 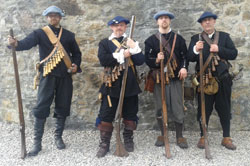 Erskine’s Regiment Historically were a covenanting regiment raised in 1643 – with contributions from each parish across the country. The regiment served in the army of the Covenant and was part of the army that invaded England in 1644. The First Captains Company today has 36 members and is generally based in the east, Aberdeen south to Newcastle. The team are one of the most active in Scotland in interpreting and re-enacting the Scottish story from 1639 to 1653 and around the events of 1689, with several high profile events in a season. The team deliver authentic Living History Camps, displays of period weapons and drills and take part in parades and skirmishes from Dumfries to Nairn and Berwick to Mull. 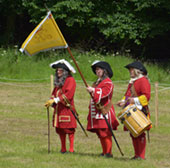 Purcell's Irish Brigade is a co-operative Irish group, made up from members of Oireas, North Irish Dragoons and Kargfergus Living History Groups. Members are from County Donegal in North-west (Ireland's Khyper Pass) Ireland with members from County Derry (the location of the Siege's of 1607, 1649 and 1688). Their motto is ‘Saol gan Staire, Saol gan Ceannacht’ (A life without history is a life without Identity).

Scotia’s Warriors are a small group that first got together in 2007. Over the years the group has evolved and they now cover a far wider range of Scotland’s historical periods including the Jacobite period. Their costumes, tools and weaponry will take you through this period and give you the opportunity to get dressed up and feel what it was like to be a highlander as well as giving you a photo opportunity. You will learn about the weaponry and the highland dress as well as how they lived and fought.

Sir Henry Inglesby’s Fife and Drum Corps - Formed in 2009 to augment the soldier who have lead Carrickfergus Pageant for over 20 years and named after Sir Henry Inglesby, who Schomberg placed as the Captain of the Guard at Carrickfergus Castle in 1689. They play music and marches for Williamite, Napoleonic and American Colonial periods, with authentic uniforms to match. Their instruments and uniforms are as authentic as is practical. Follow on FaceBook. 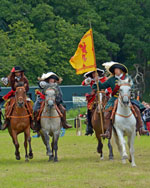 Jacobite Cavalry - Kirsty McWilliam of Riders of the Storm T:- 07784 119 377, based here in Killiecrankie provides the horses and the riders for the Jacobite cavalry. It is with special thanks to Awards for All, that we now have our own 17th century saddles and uniforms.

Battlefield Tours – Rulzion Rattray coordinates this on our behalf, having researched the history, both from the Government forces and the Gaelic side (often over looked in history books) of the Battle. The tour costs £2 and takes about 45 minutes. Good outdoor footwear required.